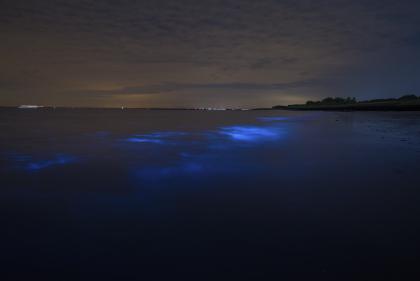 During the first week of July, from Nieuwpoort to Knokke, as well as the entire Dutch coast, beachgoers could observe a bright blue glow in the water (Picture right: Rolf de Feijter). This phenomenon, which is called bioluminescence, occurs almost every year when conditions are right (sultry weather, calm sea with little wind and weak moonlight). The color is caused by a single-celled algae named sea sparkle (Noctiluca scintillans). This type of algae are about 1–2 mm in diameter and the light is produced by a chemical reaction in the presence of oxygen involving a substrate termed “luciferin” and the enzyme “luciferase”. This process results in glowing blue waves and is in fact a kind of defense mechanism against predation, says marine biologist and head of science communications at Flanders Marine Institute (VLIZ) in “De wereld vandaag” (https://www.vrt.be/vrtnws/nl/2019/07/01/de-lichtgevende-zeevonk-is-terug-een-van-de-allermooiste-dingen/).

Within the framework of the LifeWatch project, the long term composition of the plankton community in the Belgian part of the North Sea (BNS) is studied by determination of the different taxonomic groups in a water sample using the ZooSCAN. Noctiluca is one of the regularly observed species: data from observations between 2014 and 2018 show that Noctiluca starts to bloom during the summer months, each time with a very large peak in June. Data are available via the LifeWatch data explorer. 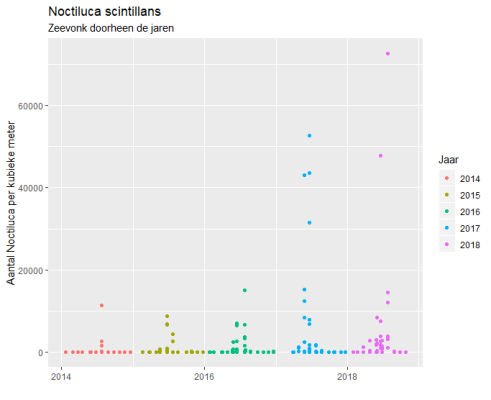 Left: Detailed image of Noctiluca (source: LifeWatch-VLIZ). Right: densities of Noctiluca (ind./m3) in the BNS between 2014 and 2019 (LifeWatch data explorer).

Within the Coastal Portal dynamic maps (see figure below) on zooplankton are also available. These maps show the densities of various zooplankton taxa measured during the monthly LifeWatch sampling campaigns. More information on zooplankton can also be found within the theme Plankton.